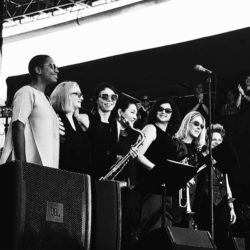 One of Sunday’s clear highlights was a set by the supergroup Artemis, a collective whose seven members — pianist Renee Rosnes, vocalist Cécile McLorin Salvant, saxophonist Melissa Aldana, clarinetist Anat Cohen, trumpeter Ingrid Jensen, bassist Noriko Ueda and drummer Allison Miller — can all regularly be heard leading their own bands. Their set played like an expertly crafted mixtape, moving from a knotty version of Thelonious Monk’s “Brilliant Corners” to a surprisingly dramatic arrangement of the Beatles’ “Fool on the Hill.” The set peaked when Rosnes and Salvant dueted on Stevie Wonder’s yearning Songs in the Key of Life plea “If It’s Magic.” As on her earlier rendition of Billie Holiday’s “Fine and Mellow,” Salvant’s delivery was deceptively understated yet disarmingly poignant; as the video screens showed Salvant in silhouette, with boats going by on the water, the whole lawn seemed to bask in her wisdom and warmth.

No shows booked at the moment.