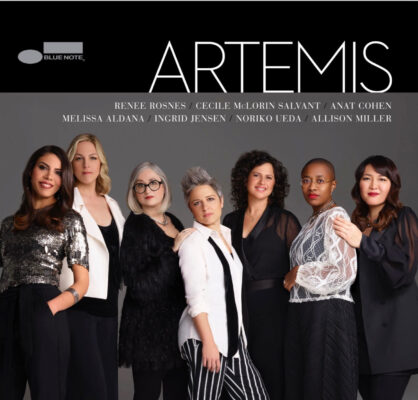 The group is distinctive not only for bringing together seven singular artists, each renowned for their own remarkable solo career; but for its multi-generational and globe-spanning line-up with members hailing from the US, Canada, France, Chile, Israel, and Japan. ARTEMIS conjures a powerful collective voice from seven of the most acclaimed musicians in modern jazz. “Each member of ARTEMIS is a unique character which is what a band needs – versatility,” says Cohen. “That’s what makes life interesting and that’s what makes music fascinating – the personalities.”

ARTEMIS is a superb nine-song set that features material composed and/or arranged by each of the band’s six instrumentalists. ARTEMIS unfurls with a dynamic flow, stunningly eclectic yet entirely cohesive. “The group identity emerged organically,” Rosnes says, and ARTEMIS discovered a thrilling collective vision early in its lifespan. “We are seven leaders, each with our own vision and personal point of view, but we play with a unified conception.”

“‘Goddess Of The Hunt’ is a sonic exploration of the powerful traits that define women,” says Miller. “We are resilient, tenacious, determined, life-giving, versatile, nurturing, elegant, mysterious, cunning, persistent, and patient. I love how each soloist clearly expresses their unique power.”

“The Greek goddess Artemis is an explorer, a torch bringer, a protector of young children, and a goddess of the hunt,” explains Jensen, who conceived of the band’s name. “I feel that her character is indicative of the energies and wide array of musical tapestries that ARTEMIS the band brings to the stage as we take our music to the moon, the stars, and beyond.”

Despite its relatively brief existence, ARTEMIS has already been featured in Vanity Fair and on NPR’s Jazz Night in America, and has performed on some of the country’s most iconic stages from Carnegie Hall to the Newport Jazz Festival.

“On a sunny August afternoon in 2018, I was among the thousands of fans attending the Newport Jazz Festival who had their minds blown by ARTEMIS,” says Blue Note President Don Was. “Although each individual member of this supergroup is a bona fide jazz titan, these incredible musicians dwell in the rarefied air of bands whose whole is greater than the sum of its already sublime parts. Their musical conversation is sophisticated, soulful and powerful, and their groove runs deep.”